Nina* came to therapy because her husband thought she was coddling their adult daughter. But as we talked, I noticed that Nina was less focused on her relationship with her daughter. Instead, she detailed the conflict between her family members. Nina saw herself as the peacemaker, trying her best to help her others get along. She complained of her husband’s blindness to her daughter’s needs, and she described her daughter’s talent for triggering explosive fights with her father.

It was easy to see how focusing on her husband and daughter’s relationship was a stabilizing force for Nina. She felt like the mature, rational one who had to put up with squabbling family members. She saw herself as the good parent who cared for her daughter, and the patient spouse who had to put up with her husband’s moods. She didn’t feel pressure to change her behavior, because she wasn’t doing any of the shouting. She saw herself as outside the conflict, and not a member of a very active emotional triangle.

END_OF_DOCUMENT_TOKEN_TO_BE_REPLACED

This week I’ve observed anxiety wrap its tentacles around my house and around the globe. I’ve watched a great dystopian scavenger hunt for hand sanitizer, toilet paper, and homeschool resources. People have scheduled more Skype hangouts than they have energy for. They’ve overfunctioned for their neighbors, only to disappear from contact once they’ve exhausted themselves. Or they’ve lectured people aggressively online, and begged their family to behave a certain way.

In short, we try to manage everything except ourselves. We focus on what calms us down as quickly as possible, instead of what will keep us calm for the duration.

Have you done any of these things in the past week?

END_OF_DOCUMENT_TOKEN_TO_BE_REPLACED 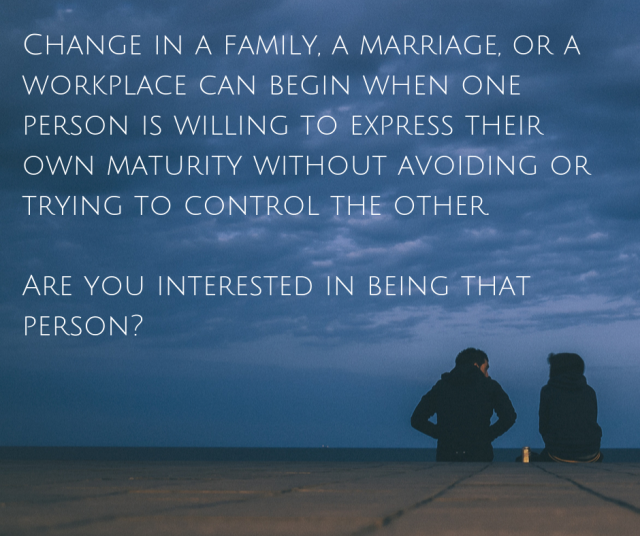 There’s a popular hymn, often sung at Christmas, that goes,

Let there be peace on Earth
And let it begin with me.

When I’m frustrated with someone, I sing a different version in my head.

Let there be maturity in this room
And let it begin with me.

Though less lyrical, these words remind me of an important principle. It’s the idea that better relationships start with changing the only variable I can manipulate—myself.

END_OF_DOCUMENT_TOKEN_TO_BE_REPLACED 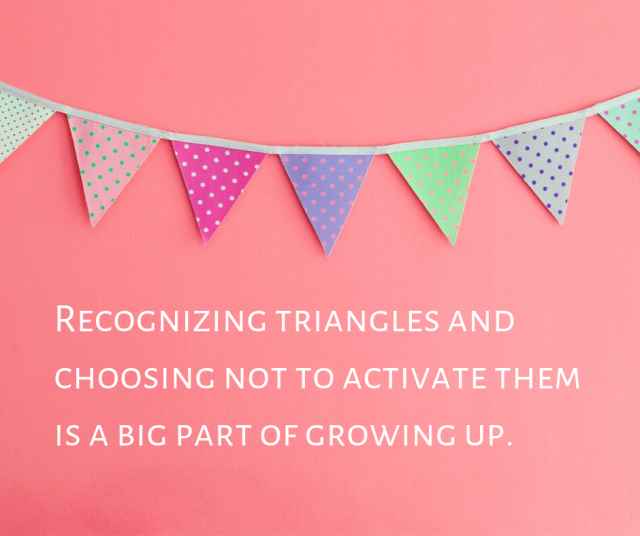 A two-person human relationship is about as steady as a two-legged stool. We often look to family members, coworkers, and friends to calm us down when we’re angry, disappointed, or confused by another person. When we pull in or focus on a third person to manage our anxiety, we are activating what is called a triangle.

When you start to look for triangles in your day-to-day life, you’ll find them everywhere. How many of these examples feel familiar to you?

END_OF_DOCUMENT_TOKEN_TO_BE_REPLACED

This week I’ve been thinking about how we keep score in our relationships. It’s a common complaint from therapy clients. “I always call my mother. She never calls me.” Or, “I don’t want to be in a one-sided friendship, where I’m always the one inviting him to go out.”

Keeping score is one way that we maintain distance in anxious relationships. A seemingly self-absorbed parent, an inconsiderate sibling, or a radio silent friend are convenient excuses to reduce contact. It’s easy to label one person as the problem, but often both parties are participating equally in the behaviors that maintain this distance (or sometimes conflict) that keeps them from a closer relationship. 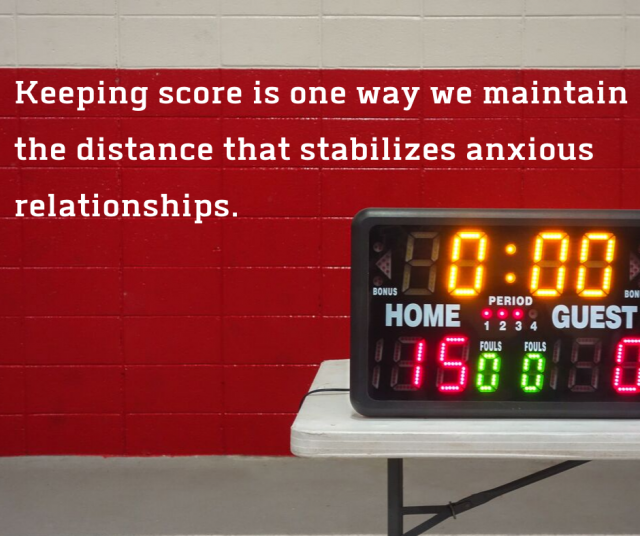 END_OF_DOCUMENT_TOKEN_TO_BE_REPLACED

Sometimes Kathleen gets too excited and forgets that there are other children in the class.

My first grade teacher left this biting review on one of my report cards. It was a criticism repeated by many people to my parents and myself: my zeal for knowledge eclipsed my awareness of social norms. Aka, I talked too much.

I heard this message enough that I had the opposite problem by middle school. I don’t blame anyone, but I do think that this type of feedback made me more aware of how I was being perceived by others. Don’t be the girl who talks too much or raises her hand for every question. Everyone hates that girl.
END_OF_DOCUMENT_TOKEN_TO_BE_REPLACED

I once had a therapy client who couldn’t get her unemployed husband to do anything. She’d beg him to apply to jobs. She’d lecture him about going to therapy. She criticized him for leaving his dirty underwear on the bathroom floor. You can guess how effective this strategy was.

If you’ve ever participated in any communication training, you’ve been taught to use I-statements. You’re told that a feeling statement helps a person understand your point of view. “I feel X when you do Y.”  My client had tried this approach. “I feel sad when you don’t take care of yourself.” “I feel hopeless when you avoid looking for jobs.” “I feel angry when you leave your underwear in the bathroom!” All this did was dial up the anxiety in the relationship.

END_OF_DOCUMENT_TOKEN_TO_BE_REPLACED

Check out my interview about how I work with therapy clients on dating anxiety and the stress of dating apps in the December issue of Counseling Today.